Exorcising toxic Trump: An intentional alternative in our back yard?


Presented to the Club on Monday evening, March 9, 2020 by William P. Densmore

I’ve been thinking a lot about furniture lately as my sisters and I assess the provenance and best disposition of fine furniture in our parents’ Worcester home. We’re learning that “dark furniture” isn’t very valuable anymore. Kind of like the stock market after today, and quite out of our individual control so not to worry. But thinking about furniture and value inevitable leads to the mass-market tag line for the Shakers furniture. Excellent, simple, stripped of vanity and excess — furniture.

But it is not Shaker furniture on my mind for tonight. Rather, I wish to digress in perhaps contrarian fashion to a set of difference considerations about the Shakers — their status as the longest running intentional community in America — an effort at utopia which has tested a set of values in many respects relevant not only to contemporary American society but as well perhaps to some of the attributes of the culture which occupies 1600 Pennsylvania Avenue.

Fifteen years ago I spent six months working at Hancock Shaker Village. Like most people, I knew about furniture and celibacy and that was about it. I learned somewhat more, but ever since I’ve wanted to spend a chunk of time digging into Shaker values and practices.  This talk is the result and it stems from sit-down interviews last month with five Shaker experts — and an admittedly fast literature review.

What I will highlight, using with attribution the words of my interviewees as well as published authors is this: The Shakers can teach our contemporary politicians, and maybe Donald Trump, much about gender equity, caring for “others,” housing and economic security and the management of dissent. Seventy-five years before emancipation, and 150 years before suffrage, Shakers were already practicing social, sexual, economic and spiritual equality. For the most part, the Shakers just lived their politics, although in 1852, Shaker elder Frederick Evans was proselytizing that women should have the right to vote.

There are multiple sources — from Wikipedia to scholarly volumes, to fill in the basic Shaker history so I’ll rewrite to a few sentences. Factory worker “Mother” Ann Lee and her husband arrive near Albany, N.Y., in 1774 from Manchester, England and after several frustrating years begin to attract converts to her Protestant-offshoot idea of a community that sees women as a natural representation of God after the death of Jesus. The three tenets: celibacy, confession and community. At its peak, the Shaker movement involved 6,000 members and followers at 19 sites from Kentucky east to Maine; only two (or is it three) members remain — at Sabbathday Lake, Maine.

The Past Is Never Dead: On intergenerational trauma

Presented to the Club on Monday evening, January 13, 2020 by Erik Bruun

1. The Damnedest Thing I Ever Saw

Seventy years ago my grandfather, Henry Ashton Crosby, was sitting in a New York City subway. He had recently returned to the United States after serving as a front-line officer during World War II. He was a gracious and polite man, so when an elderly woman got into the crowded subway car, he stood up to offer his seat. Just then another man scooted behind him to take the seat. My grandfather snapped.

He swung around, picked the man up and threw him through the subway window, smashing glass everywhere. The police arrived. After learning that he was a combat veteran, they let him go.

“That sort of thing used to happen all the time after the war,” my stepfather Player Crosby explained to me when I was a boy, delighted to have such chivalry in my family. I mean, what a grandfather!

Two overriding memories come to mind when I recall him.

One was his sparkling eyes. They absolutely lit up when he saw me after an extended absence as he shook my hand firmly and vigorously. He looked at me as if I was the most exciting person he could imagine seeing at that moment. It left such an impression that I try to mimic his enthusiasm when I see young people who I have not seen for a while.

This was a fantastic trait that all six of his children inherited. When you were in his presence you felt as if you were not just seen, but a source of complete delight. Your life felt special. He loved people and people loved him, as the hundreds who attended his standing-room-only funeral when he died at the age of 87 would attest.

The second memory was as a 10-year-old visiting him on summer vacation in Franconia, New Hampshire. I cannot remember what prompted it, but we were on the porch and he started talking about a patrol he led on the Western Front during World War II.

Across the bridge: A personal reflection 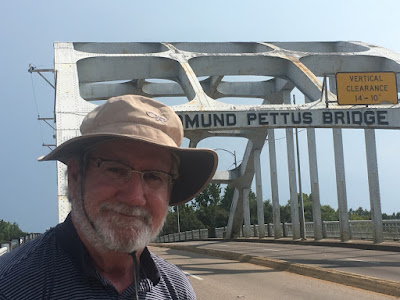 Presented to the Club on Monday, February 10, 2020 by Richard L. Floyd

We will come to the bridge in my title in due time, but it is a later piece of the story I want to tell tonight, so I will begin with an important book I read last summer while I was filling in as a guest preacher for my daughter during her maternity leave.

The book was Jesus and the Disinherited by Howard Thurman. My pastor had given it to me the year before, but I hadn’t got around to reading it. It was written in 1949, which happens to be the year I was born, and it came out right before the civil rights movement really got moving in the 1950’s.

Howard Thurman, a black minister and scholar, was the Dean of Marsh Chapel at Boston University. He had traveled to India and had met Mahatma Gandhi. When Thurman asked Gandhi what message he should take back to the United States, Gandhi said he regretted not having made nonviolence more visible as a practice worldwide and he famously remarked “It may be through the Negroes that the unadulterated message of nonviolence will be delivered to the world.”

Thurman did come back with that message about non-violent resistance, and became one of the influences on one of his students, Martin Luther King, who did his doctorate at Boston University. And the Civil Rights movement did in fact employ a variety of the tactics of nonviolent resistance, such as sit-ins, bus boycotts, Freedom Rides, marches, and mass demonstrations.

In his book, Howard Thurman draws comparisons between the socio-political world that Jesus grew up in under Roman Occupation, and the American South during the Jim Crow era. In both cases powerful majorities disinherited powerless minorities through fear and the threat of violence. The regular lynching in Howard Thurman’s day and the regular crucifixions of Jesus’s day were both designed to instill terror in the disinherited minority and keep them in their place.

The winter before the war in Washington: The Civil War era recollections of Henry Laurens Dawes