Then, Now and What's Next: Ruminations on Time and Technology

Presented to the Club by Richard L. Floyd on Monday evening, January 25, 2010

As the first Monday Evening Club paper of a new decade I want to do some looking backward as well as gazing forward. Looking backward is not so hard, since we all have 20/20 hindsight, but gazing forward is more difficult. It was Søren Kierkegaard who once said, “Life must be understood backward, but it must be lived forward.” So let me do the easy part first and look backward, telling a couple of brief stories about two men who were born in the late Nineteenth Century, came of age in the early part of the Twentieth, and lived long lives in which they witnessed technological advances unparalleled in any other period of human history. Then I will briefly try to look forward to take some guesses about “what’s next?” 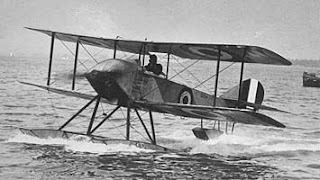 The first story is one you may have read about in the paper this past year. It is about Henry Allingham, one of the last two British soldiers to fight in the First World War. He died last July at the age of 113. He was, for one month of his life, the oldest verifiable living man on earth. Asked about the secret to his longevity he credited “cigarettes, whisky and wild, wild women – and a good sense of humor.”

Originally a Navy man, Allingham was first assigned as a mechanic, and later a spotter, to a unit that carried out anti-submarine air patrols for the newly formed RAF. Keep in mind that the Wright brothers’ first flight had been launched as recently as 1903, so airplanes were just a decade old when the Great War broke out, and this would be the first significant use of them in war. The Sopwith Schneider seaplane that Henry’s unit flew to look for German U-boats and other ships was really nothing more than a big box kite with an engine. It had to be lifted by cranes in and out of the water from a ship every time it went on a mission. The plane carried no parachute, no navigational instruments, save a map and a compass, no radio, only a carrier pigeon. To us it sounds primitive, yet at the time air flight was so new that it was cutting-edge technology. Today those fliers needn’t have risked their lives in reconnaissance missions. They could rely on satellites.

The second man whose story I want to tell is my maternal grandfather, William Ira Laffoon. I only knew “Granddaddy Bill” when he was an old man, for he turned seventy the year that I was born. He was born on October 8, 1881, and when he was a boy of eight he traveled with his family from Missouri (“Missour-ah” is how he always said it) to Indian Territory on a Conestoga wagon to participate in the Oklahoma Land Rush of 1889. The Land Rush offered 2 million acres of free public land for homesteading on a first come first served basis. The rush, or “run” as it is more properly called, began at high noon on April 22, but many of the participants had already picked out choice parcels and hid on them until the official time. These were the “Sooners.” The ones who played by the rules and went when the cannon was fired were called “Boomers.” Unlike Rome, Oklahoma City, was built in a day, for there were over 10,000 inhabitants by late afternoon of the first day of the run. My grandfather and his family were the opposite of the “Sooners,” and waited until the next day to quietly go in to stake their claim, which is how my mother came to be born in Oklahoma City.