Red and Blue Divided by 11 = Purple: The rival regional cultures of America

Presented to the Club by Jack Spencer on Monday evening, Feb. 27, 2012 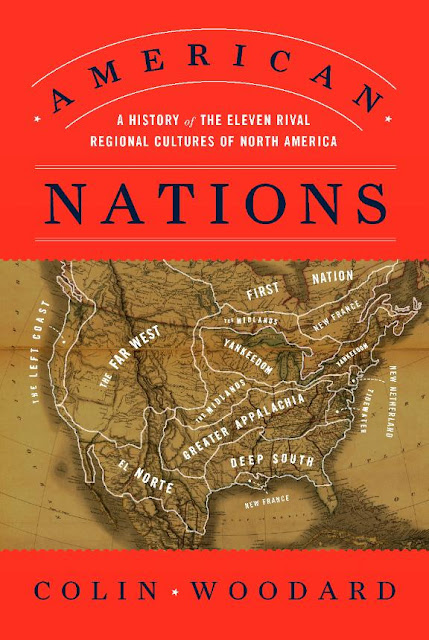 This paper is dedicated to Martin [Langeveld], in appreciation for all that he does by making us part of the cyber world by posting our essays online.  But even more than the dedication is that, against all my instinctual inclinations, I have written this paper out so it can join the ranks of all the illustrative essays that are already there.  It will also mean that the club will have a reasonable dismissal time as an organized, written paper will mean that I ad lib less.
Before I partially explain my title, “Red and Blue Divided by 11 = Purple,” let me first express my regret that a title was not created which would get more hits, so that it would, at least, be in the top four.  An alternative title was thought up, “Sex & More Sex Divided by Catholic Bishops’ View of Birth Control = Rick Santorum on Steroids.”  This title would do quite well and might start a trend in the club that, rather than obscure titles, there will be titles that have even less to do with the paper being presented but will contain key words which will get hits, i.e. Lindsay Lohan, Lady Gaga, Giants and Super Bowl.
But back to my original topic and where it came from.  For many years, especially since the way the 2000 Presidential election was decided (and despite a period of hope with Obama’s election in 2008), I have been quite concerned about the divisions in our society and the inability to reach pragmatic and reasonable solutions to issues such as an understandable and fair tax code, modifications to social security so it is safe for the next 30-40 years, environmental trade-offs so real changes take place, transportations bill, etc., etc.  Some issues such as Medicare and the health system are more complex.  We appear to be unable, in many areas, to function in the 21st century.
The reasons are many and this essay just means to touch on (1) defining some of the issues (2) presenting some theories on the complexity we have become.
In Colin Woodard’s book, On American Nations, he argues that it is too simplistic to describe us as red and blue states, with a few that are purple that can shift either way, such as Colorado.  We are eleven rival regional cultures.  This map I am handing out (it is the teacher in me) shows where the eleven are and what Woodard has labeled them.  Since we in the Monday Evening Club have people born outside of Yankeedom and many who have lived a variety of places in the United States, your vies in the discussion could be interesting.  For the sake of full disclosure, I am Yankeedom every which way, from ancestors to where I have lived.  Instead of the slogan, “Don’t blame me, I’m from Massachusetts,” it should have been, “Don’t blame me, I’m from the steadfast Yankeedom.”
Read more »
Posted at 4:04 PM No comments: