Van Gogh's Irises: How much is a painting worth? 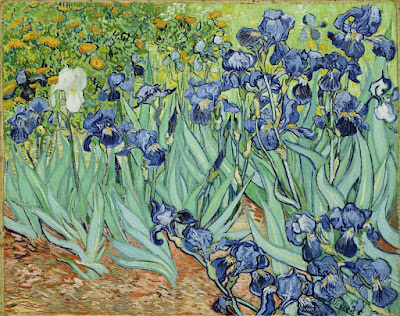 Presented to the Club by David T. Noyes in December 1988

I would like to ask you to think about the items on the following list. Can you identify what they have in common?

We’ll come back to this list in a moment.

A little over a year ago, on November 11, 1987, the art auction house of Sotheby’s in New York City auctioned a painting depicting a garden of blue irises painted in 1889 by Vincent Van Gogh. It was lot number twenty-five in a ninety-four piece evening. A crowd of 2,300 people had gathered in the cramped bidding room with intense anticipation; and at 7:55 p.m., Irises was brought on stage. The bidding started at fifteen million dollars. At thirty million, only two bidders remained. The price then passed forty million, the previous highest price paid for any painting. The bidding finally concluded at forty-nine million dollars. The total elapsed time: three minutes, thirty seconds!  Including the ten percent buyer’s commission, the total price came to fifty-three million dollars, or in real money — eight billion yen!
Read more »
Posted at 1:54 PM No comments: