The mark of a champion: Vince Lombardi and the Green Bay Packers 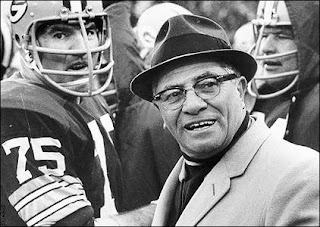 Presented to the Club by Erik Bruun on Monday evening, December 12, 2011

The best athlete I have ever known was a friend from college named Henry Fox. Henry had been the New England cross-country ski champion in high school. When I became a coxswain on the Trinity College freshman crew team, Henry was the strongest rower on the Trinity varsity lightweight team, the fastest lightweight boat in the country. He was the kind of person an underclassman like me aspired to be. He was funny, enthusiastic and drove himself incredibly hard. One of his favorite ways to push himself on a run was to pick a spot 100 feet away and hold his breath tightly until he reached the destination, his lungs exploding for oxygen upon arrival.

Henry loved to recite Vince Lombardi sayings and stories. "If you can walk, you can run," he crooned with delight. He told of a time Lombardi's Green Bay Packers played a particularly lackluster first half. As the players waited in the locker room, dreading the fury of their notoriously fiery coach, Lombardi instead opened the door, stuck his head in and with a surprised look declared: "Oh, I'm sorry. I was looking for the men's room." He closed the door and left, letting the players stew in their own shortcomings. The Packers stormed back on to the field and won the game.