What would Thomas Paine do? 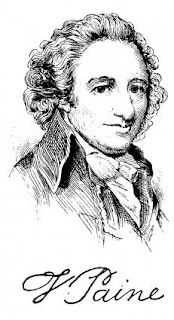 Presented to the Club on Monday evening, Nov. 14, 2011 by Charles F. Sawyer
In 1989, I delivered my first paper to the Monday Evening Club. The subject of the paper concerned the implications of a book written by Bill McKibben, entitled “The End of Nature." Published that year, after having been serialized in the New Yorker, it is regarded as the first book for a general audience about climate change, and has been printed in more than twenty languages. A recent updated version was published in 2006. The message of the book was that true nature, which was independent of human influence, has been replaced by an artificial nature that had been created by the actions and interactions of human beings. He pointed out that human activity had changed the chemistry of the atmosphere, with enormous implications for the quality of life in the future. He pointed out that our influence on climate, with changing temperatures and sea levels would likely lead to less predictable and more violent weather events. McKibben’s discussion of the issues presented by these changes was both broad and detailed and illustrated in both scientific and human terms. He listed possible consequences of environmental degradation including floods and famine, worsening asthma and hay fever. He points out that we way in which we live, with our cars, our houses, plastics and pesticides, are as much a part of our world as the trees, waters and hills that are the natural landscape. He takes the position that we will have decide between our material world and the natural world. He envisions a “humbler world” where we would make do with less and thus take a less dominant position with relation to nature and where nature might once again establish itself as independent and constant. In the end, he does not think that likely. He sees a managed world, in which human beings control the climate, genetics and ecology as the most likely scenario, short of ecological catastrophe.