La Moria Grandissima: the Black Death of the 14th Century 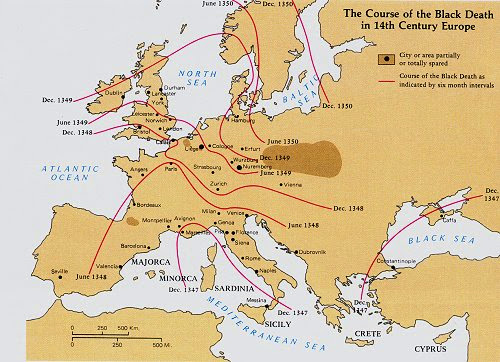 Current news reports are filled with alarms of the Ebola virus. In the recent past, we have been warned about SARS, AIDS, Mad Cow Disease, Lyme disease, and multiply drug resistant bacteria such as MRSA. But tonight, I’d like to take you back 670 years to the mid fourteenth century to the most infamous scourge of all time—La moria grandissima. This is what the medieval Europeans called the Great Mortality, medieval Muslims named the Year of Annihilation, and modern history refers to the Black Death.

There are Common Source Epidemics, usually coming from a contaminated water or food source. This was the case of the cholera outbreak seen in Haiti after the catastrophic magnitude 7.0 earthquake in January of 2010. Or many of you may recall the Pittsfield, Massachusetts “Beaver Fever” Giardiasis outbreak over the three months beginning November, 1985 through January of 1986, when there were 703 confirmed cases of the disease originating from the contaminated City reservoir. (As an aside, Harold Hutchins did a paper of the same title that year—but, true to Monday Evening Club tradition, the subject turned out to be a discussion of the pre-American Revolution trapping industry in the upper Midwest!)