The Great Commoner: William Jennings Bryan and the US presidential campaign of 1896 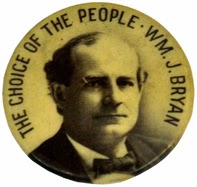 Presented to the Club by Roger B. Linscott (date of presentation unknown — sometime in the 1960s or 1970s). Roger was, for many years, the associate editor of The Berkshire Eagle, Pittsfield's daily newspaper. He won the Pulitzer Prize for his editorial writing in 1973, and died in 2008 at the age of 88, having been a member of the Club since 1950. We are indebted to Roger's daughter, Wendy Lamme, for a treasure trove of Roger's Monday Evening Club papers.

This paper is principally the story of a political campaign. But no member of the Club need tremble for fear that our unwritten injunction against political topics will be breached. Just as a statesman has been defined a dead politician, so can history be pictured as the politics of yesterday. The presidential campaign I propose to discuss is not the one that engaged our attentions so thoroughly last fall, but rather a campaign far enough removed in time to be labeled history rather than politics — so far removed, in fact, that no person here tonight is old enough to have known at first hand the enormous flood of passion and prejudice which it unleashed throughout the land.

To me, the presidential contest of 1896 has always seemed the most exciting of all our presidential campaigns, and in many respects the most significant as well. It drew a dividing line through the nation's history; it marked the last stand of agrarianism against an inexorably rising industrialism; and it marked the dramatic emergence of an arresting new personality bursting like a meteor on the American scene. This political meteor was, of course, William Jennings Bryan — Bryan the Boy Orator, the Great Commoner, the young crusader from the prairies of Nebraska who, in one magnificent flight of oratory, expressed so powerfully the dissatisfaction of the economically disenfranchised that he was catapulted overnight from obscurity to fame and, very nearly, into the White House.

It is difficult for us today to understand the tremendous impact that Bryan made upon America in that fateful year. Our judgment of him is too heavily weighted by his later follies and failures. He lived too long; he talked too much; he ran for president too often; he embraced too many foolish causes. When he finally died in 1925, it was in Dayton, Tennessee, where he had just suffered his last and most ignominious defeat, in the celebrated Scopes trial, at the hands of Clarence Darrow. His pathetic attempt to defend Bible Belt fundamentalism against the forces of scientific progress had destroyed what standing he still had with the new generation. H. L. Mencken spoke for most of the intelligentsia when, on the day after Bryan's death he wrote: "He was born with a roaring voice, and it had the trick of inflaming halfwits. His whole career was devoted to raising those halfwits against their betters, that he himself might shine."