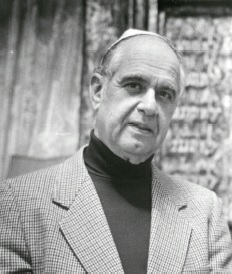 The Monday Evening Club has lost its longtime member and secretary-treasurer, Rabbi Harold Salzmann. Here is his obituary. He had been a member of the Club since 1955.

Rabbi Harold  I. Salzmann, 96, died peacefully on Tuesday September 25, 2018 at Mt. Carmel Care Center in Lenox. Born in Cleveland, Ohio in 1922, Rabbi was the son of Bernard Leopold and Rae (ne Busch) Salzmann. The son and grandson of traditional rabbis trained in the religious schools of the Austro-Hungarian Empire (today’s Slovakia), as a youth he received a very thorough training in Biblical Hebrew and Talmud-Torah studies. Eager to explore newer avenues in Jewish thought, Rabbi Salzmann pursued his rabbinical studies in the Reform Movement at the Hebrew Union College in Cincinnati, where he was ordained in 1950. Throughout his life, he continued his scholarship in theology and as a teacher who trained bar and bat mitzvah children as well as adults. An amateur historian, he collected antique postcards of the Berkshires, possessed a wealth of knowledge about the postal service of British Mandate Palestine, and had begun to write a history of the Jewish community of the Berkshires before his death.
Before joining the US army as a  chaplain at the rank of Second Lieutenant (and later an Army Reserve Captain), he and his wife Audrey (ne Pastor) whom he married in 1950, held a pulpit in Cedar Rapids, Iowa. His time as a chaplain for the Western Area Command took him to Germany and Belgium; in Luxembourg, he took part in a dedication ceremony to honor General George Patton.  Turning down a full time commission in the US Army, he returned to civilian life in 1954. He frequently remarked that it was the natural beauty of the Berkshires and his ability to be active in both Jewish and secular life that made him turn down other job offers at larger congregations in New York and Rhode Island.
Over the past 64 years, Rabbi Salzmann dedicated his life to building his Reform Jewish community in Pittsfield. He raised funds and along with the Temple board, engaged an architect to design and to build the new synagogue that is currently home to Congregation Anshe Amunim on Broad street in Pittsfield. The Temple’s membership grew and gained new financial stability through the generosity of congregants who shared his vision. Although he retired early, he remained active as the emeritus rabbi, often stepping in to replace his younger colleagues to conduct services, funerals and weddings.  The Temple honored both the Rabbi and his wife, recently renaming the religious school in their honor. Nationally, he was recognized by his alma mater, the Hebrew University of Cincinnati, with an honorary doctorate in 1975.
At least in equal measure, Rabbi devoted himself to the civic life of the Berkshires, as a citizen and one of its most dedicated religious leaders. Shortly after coming to Pittsfield, he became a member of the Rotary Club. In 2012, fellow Rotarians  recognized his many decades of service to Rotary and the community with the Paul Harris Award.  One of the longest serving members of the clergy in the Berkshires, he delivered more invocations at parades and high school graduations than any other rabbi, priest or minister in the county.  Active in many other capacities in the city and county, from the board of trustees of the Berkshire Medical Center to the committee that restored the World War I memorial in Veterans’ Park on South St.  A longtime member of the Berkshire Clergy Association, he embodied the civic spirit of the Kennedy-era. In addition to his love of collecting books and stamps, he remained the secretary-treasurer of the Monday Evening Club whose members included his dear friend, Norman Rockwell, well into his 90s.
Rabbi Salzmann is survived by his wife and rabbinical partner, Audrey, with whom he would have celebrated their 68th wedding anniversary on October 8, 2018; a daughter, Dr. Ariel Salzmann of Kingston, Ontario Canada, a son, Joshua Salzmann of London, UK. and five grandchildren Zachary (and his partner Carrie), Francesca, Asher, Natasha and Jordan. The Salzmann family wishes to express their gratitude to our extended Berkshire mishpacha, Jewish and non-Jewish, who frequently visited rabbi as his health declined as well as to express our thanks to the nurses, aides, and staff of Mt. Carmel for the high quality of care and many kindnesses they showed him in his final months of life.
Salzmann, Rabbi Harold, age 96, Rabbi Emeritus of Temple Anshe Amunim, died Sept. 25, 2018 Funeral services will be held FRIDAY, Sept. 28 at Temple Anshe Amunim at 12:00 Noon with Rabbi Liz, P.G. Hirsch, spiritual leader of the Temple, and Rabbi Josh Breindel, spiritual leader of Congregation Beth El in Sudbury, Mass., officiating. Burial will follow in the  Pittsfield Cemetery. In lieu of flowers, donations in Rabbi Salzmann’s memory may be made to the Southern Poverty Law Center through the Devanny-Condron Funeral Home which has been entrusted with his care.
Posted at 4:03 PM No comments: