Terraforming the Earth: Could a little careful geoengineering allow time for sustainability and resilience to work?

Presented to the Club by Martin C. Langeveld on Monday evening, April 22, 2013 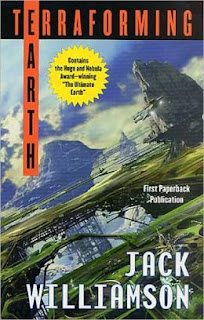 Terraforming is a concept that has crossed over from the realm of science fiction into at least theoretical engineering applications. The word was coined by author Jack Williamson in a short story called “Collision Orbit,” published in a science fiction magazine in 1942. Literally, terraforming means earth-forming, or transforming planets into earthlike states. The idea of terraforming is that as humankind begins to travel the universe with the intent of settling on other worlds, most planets we encounter will need a little modification to suit our needs. Perhaps the atmosphere needs a little more oxygen, perhaps the temperature needs to be turned up a notch, and beyond that, the planet might need to be seeded with various microbial organisms in order to provide the basis for a food chain that could support people and a variety of animals. Terraforming would be applied to make the requisite changes.

Astronomer Carl Sagan, in the 1960s and 70s, detailed how this might be done both with Venus and Mars. For Venus, a planet with a greenhouse problem far worse than the Earth’s, Sagan suggested seeding its atmosphere with algae, which would lock water, nitrogen and carbon dioxide into various organic compounds. As carbon dioxide was removed from the atmosphere, temperatures would drop to “comfortable” levels. Unfortunately, later findings showed that the clouds on Venus are far thicker than previously believed, and they contain such high levels of sulfuric acid that algae would not be likely to survive.

The problem on Mars is the opposite: terraforming the red planet would require building up a suitable atmosphere and warming it. NASA was sufficiently intrigued with the notion of making Mars habitable that it held several conferences following up on Sagan’s ideas. The general idea for Mars is to unlock the carbon dioxide in the planet’s ice cap in order to increase its atmospheric pressure, and then to use phytoplankton to create a balanced atmosphere. As the planet warmed up, its frozen reserves of water would become accessible, allowing for the introduction of plants.

While re-engineering Mars to suit human purposes is theoretically more feasible than dealing with Venus, the effort involved would be enormous, since vast quantities of materials would have to be brought to the planet. Depending on the methodology, it would require the mining of ammonia on asteroids, methane or other hydrocarbons on Saturn’s moon Titan, or the mining of fluorine on Mars itself. There are also suggestions for space-based mirrors and the diversion of small asteroids to crash into the Martian surface.