By the hair of my chin: Facial hair through the ages 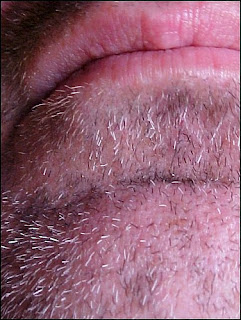 Presented to the Club by William A. Selke on Monday evening, March 21, 2011

It was on "The hair of my chin," his beard, that the little pig vowed his defiance to the wolf. With men, as well as well as little pigs, beards have been traditional symbols of maleness, and, in some eras, have had important significance. Implying that a man would rather emasculate his chin than fail to live up to a promise is reflected in the oath, “By my beard” used by Shakespeare in “Two Gentlemen of Verona.” In all but the most primitive societies, when a beard was worn, it has been a conscious choice, but that choice has waxed and waned throughout history. It is the wearing of beards, and the razors for removing them, that we will consider this evening.

On display in the Egyptian Museum in Cairo are several oval gold disks, with small handles on one side, identified as razors of the period four millennia ago. If one doubted that these devices were effective, relics and pictures of Egyptian royalty of that period show the men shaven, though in some cases with a small circular beard, real or artificial – of gold – in the middle of their chins. Clean chins and jaws have been a possible choice for the elite for a very long time.

Meanwhile, across the Red Sea, Jews following the instructions in Leviticus, Chapter 19, verse 27 wore truly full beards. That verse states that “Ye shall not round the corners of your heads; neither shall thou mar the corners of thy beard.” (We might note that verse 18 of that same chapter includes the “Great Commandment “ –“Thou shalt love thy neighbor as thyself.”) Over the course of history, we’ll see men adding or removing their beards for indefinite reasons, but in this case the authority is clear.