The Back Stairs: The world of servants in America

Presented to the Club on Monday Evening, March 7, 2016 by Albert Easton 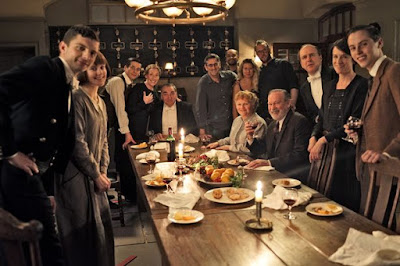 I am sure that most of us here have watched, or are at least familiar with the television program Downton Abbey, or its predecessor, Upstairs Downstairs. Each of these programs derives part of its drama from the contrast between the aristocracy and the servant class. Although each is based in England at a time and place when this contrast was most clearly delineated, there certainly was a somewhat similar contrast in America up to about 1930, and my purpose tonight is to explore the world of servants. Who were they, what were they like, and what has become of them?

Servants have probably existed for most of human history. It was natural for one person who was able for whatever reason to dominate another, to request that that other person take on some of the tasks he had been doing. Very often, the dominance was a result of warfare, and the people of the defeated nation were made the slaves of the victor. Often, too, the younger children did not inherit enough to support themselves, and had to offer services to others in order to survive.

Dick was a teacher, poet, cook, gardener, and lover of the natural world. Childhood mentors fostered a love of books and learning, which led him to Dartmouth College and Kings College, Cambridge in England.

There he met Susan Stroud, whom he married on December 19, 1965. They spent the majority of their lives together in New Lebanon, New York, where Dick was a teacher at Darrow School. They raised two daughters, Diana and Felicity, at their "Garden Hill" home, surrounded by flower and vegetable gardens with a spectacular view across Lebanon Valley.

In 1970 Dick became a professor of English at Berkshire Community College in nearby Pittsfield, Massachusetts. An exacting teacher with high expectations for all, many former students credit him with changing the course of their lives.

For 25 years beginning in 1980 Dick wrote a weekly "Our Berkshires" column for The Berkshire Eagle. His columns challenged readers to connect the dots between vignettes of Berkshire life and his favorite poets and thinkers, and revealed the thoughtful, caring and generous man that he was.

For the last 12 years of his life, Dick and Sue lived near Felicity in Portland, Oregon, where he turned his eye on the lush environment of the Pacific Northwest and enjoyed the city's art and musical offerings. He delighted in his grandchildren, Helen and Norris Meigs of Portland and Hanna and Elena Johnson of Minneapolis.

"How simple happiness is, really," concludes one of Dick's poems. That lesson may be Dick's greatest legacy to all who remember him whether it's to be found in a delicate spring bloom, a morning walk, or a fresh-baked loaf of bread. A brief memorial service will be held at Willamette View in Portland on Monday, March 7, with a fuller celebration of his life planned for this summer in New Lebanon.

We also enjoyed this remembrance of Dick by Judy Waters in The Berkshire Eagle of Friday, March 11, 2016.