The Club's seal: a historic restoration

One of the Monday Evening Club's longstanding traditions is that the Secretary (currently Rabbi Harold Saltzmann) orders for members, in a very small press run, small folding wallet cards listing the Club's members and the schedule of meetings for the season. The format of this card has changed little since the Club's early days.

The front of the card has always included a small reproduction of the Club's seal. As can be seen at the right, the seal has gone through multiple generations of reproduction, losing details each time, so that in recent years, the words of the motto have been barely readable and the rest of the image is kind of a murky mess.

So we recently located an early imprint of the seal, on the cover of a booklet printed on the occasion of the Club's 30th anniversary in 1899. That seal, printed in blue ink slightly under one inch in diameter, is much sharper, as you can see at the left, than the degenerated one on our cards.

We had the 1899 seal scanned at high resolution, and commissioned a graphic designer, Erika Elder of Brattleboro, Vermont, to do a historic restoration — sharpening all the details of the lettering and images.

The scan revealed quite a bit of detail: the seal has a border of alternating open books and scrolls; the obscure X above "RATIONE" turns out to be a crossed carving knife and fork; the other image is an inkpot and quill pen; the date 1869 is at the bottom of the border, and there are some decorative leaves (perhaps acanthus) here and there.

Once Erika completed the restoration, the seal can now be seen in all its glory: 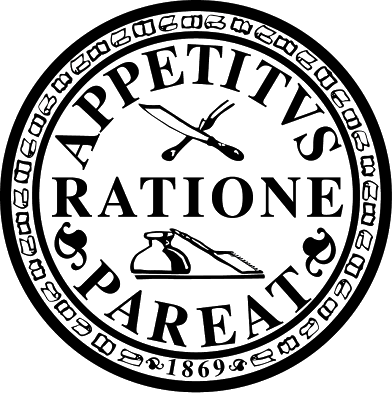 We also did a bit of research on the Latin motto, which turns out to mean, "Impulse shall obey reason." Or as some translators render it, "Let reason govern your desires." The phrase comes from this passage by Marcus Tullius Cicero (106 BC - 43 BC):

This is from Book I of Cicero's De Officiis (On Duties), written in 44 BC.  In case your Latin is rusty, as translated by Harvard's Walter Miller in 1913, it means:


In entering upon any course of action, then, we must hold fast to three principles: first, that impulse shall obey reason; for there is no better way than this to secure the observance of duties; second, that we estimate carefully the importance of the object that we wish to accomplish, so that neither more nor less care and attention may be expended upon it than the case requires; the third principle is that we be careful to observe moderation in all that is essential to the outward appearance and dignity of a gentleman. Moreover, the best rule for securing this is strictly to observe that propriety which we have discussed above, and not to overstep it. Yet of these three principles, the one of prime importance is to keep impulse subservient to reason.

And, yes, the seal contains a typo: it should say RATIONI, not RATIONE. But we are not about to fix a 144-year-old typo.

Tags: history of the club, seal of the Club