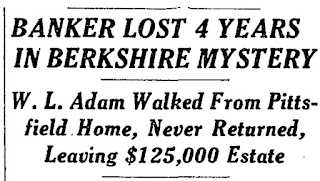 This is the third post in a series on the historic membership roster of the Club. These posts may be updated as additional biographical information on the members is uncovered. Research by Martin C. Langeveld, incorporating research by Harold L. Hutchins for a paper given to the Club in 1993.

The following became members of the Club from 1877 through 1883:

Rev. Jonathan Leavitt Jenkins — born in Portland, Maine in 1830, the son of a preacher; graduated from Yale College in 1851; became pastor of the First Church of Lowell, and then the Pearl Street Church in Hartford and the Congregational Church of Amherst, Mass., before coming to Pittsfield, where he served for 15 years as pastor of the First Church of Christ. He presided over a major redecoration of the church's sanctuary in 1882, the installation of stained glass windows including the Tiffany-designed Allen window, and the 125th anniversary celebration of the church in 1889. In 1892, he left to become pastor of the State Street Congregational Church in Portland. Later he moved on to a pastorate in Jamaica Plain, Mass., and died while visiting Pittsfield (?) in 1913.

Earl Grey Baldwin — 1847-1922; born in Coventry, Vt.; attended Amherst College, member of the class of 1876 but did not graduate; served as principal of Pittsfield High School from 1877 to 1883; also as principal at Wendall Hall School for Boys, Norwalk, Conn., and again at Pittsfield 1888 to 1892; was correspondent for Springfield, New York and Boston papers and editorial writer for The Berkshire Eagle; died in Pittsfield.

Rev. Charles Hezekiah Hamlin — 1850-1929; born in Farmington (now Plainville), Conn.; graduated from Yale College in 1871; studied at Yale Divinity School and in Leipzig and Bonn, Germany; resided in Chester, Mass. 1876 to 1879; served as pastor of South Congregational Church 1879 to 1884; then served as pastor at the Easthampton, Mass., Congregational Church for 28 years, plus 16 years as pastor emeritus; died in Farmington, Maine.

S. E. Nichols — owned a music and stationery store, which also sold books and is listed as publisher of several books and pamphlets; sold this establishment in 1882; served as a lieutenant in the 37th Massachusetts Volunteers and as its historian in later years. He was a founder of the Young Men's Association.

Rev. William Wilberforce Newton — 1843-1914; born in Philadelphia; served as a private in the Civil War in 1863; graduated from the University of Pennsylvania in 1865 and earned a master's degree in 1868; attended the Episcopal Divinity School in Philadelphia; served as clergyman at Episcopal Churches in Newark, N. J., Boston, and at St. Stephen's Episcopal Church in Pittsfield; author of a number of books of poetry, sermons and essays; died in Brookline, Mass.

William M. Pomeroy — graduated from Amherst College in 1861; served as editor of the Springfield Union from 1872 to 1881; became a partner, with William D. Axtell, in the operation of The Berkshire County Eagle in July 1881, continuing until 1883, when he was succeeded by John B. Haskins.

Edward Tinker Slocum — born in Grafton, Mass. in 1849; graduated from Amherst College in 1871; in 1874 received both a Master of Arts from Amherst and a law degree from Boston University Law School; practiced law in Boston for three years and then moved to Lee, Mass., where he practiced until moving to Pittsfield in 1881; elected register of probate and insolvency in 1881, served until 1894 when he was appointed judge of the same courts, a life office; was prominent in the development of a city charter for Pittsfield and was elected to the first city council in 1891; served as superintendent of the Sunday School at First Church of Christ in Pittsfield from 1886 to 1894 and was active in many civic organizations.

William L. Adam — born in Pittsfield in 1855; graduated from Williams College in 1877; graduated from Columbia Law School in 1880, but never practiced law; the son of Club member Robert W. Adam; succeeded his father as treasurer of Berkshire County Savings Bank and eventually became its president; active in the affairs of the First Church of Christ. On the night of April 9, 1933, at the age of 78, he left his home at 16 West Housatonic Street and never returned; the disappearance was never solved. From The New York Times of March 28, 1937:


On the Sunday of his disappearance Mr. Adam, who was president of the Berkshire County Savings Bank, attended services at the First Congregational Church [First Church of Christ] in the morning, went to the postoffice, sorted his mail at the bank and dined alone at his home. In the afternoon his physician, Dr. Brace W. Paddock [who joined the Club in 1908], made a friendly call.

The banker got his own supper. He was reading in his library when his housekeeper, Mrs. Mary McGinnis, and her assistant arrived shortly after 9 p.m. About 3:30 a.m. Mrs. McGinnis thought she heard a door close on the floor below, but she dozed off to sleep.

Mr Adam was accustomed to have breakfast promptly at 8 a.m. When he did not appear fifteen minutes later Mrs. McGinnis called, and, receiving no response, found open the door leading from his room into the hall. The bedclothes were turned down, but there was no indication that he had slept. He had changed from his black Sunday suit to a gray business suit. His gold watch was carefully put away in its case in a bureau drawer. In a pocketbook was $16 in cash. He did not operate an automobile.

A foot of snow was on the ground and streams were at their Spring flood peak. The West Branch of the Housatonic River, near by, was dragged. Lakes and abandoned quarries were searched in vain.

Securities in Mr. Adam's name at the time of his disappearance had an appraised value of $446,368, a large portion of which had been put up as collateral on loans. The value of the estate is now said to be about $125,000, and Judge Charles L. Hibbard [a member of the Club] is receiver.

The estate cannot be probated by law for fourteen years from the time of his disappearance.

Charles Sedgwick Rackemann — 1857-1933; son of Frederick William Rackemann of Bremen Germany, and Elizabeth Sedgwick; attorney in Pittsfield, later in Boston. The law firm Rackemann, Sawyer & Brewster is still in practice in Boston; it was founded by Charles S. Sedgwick and Francis V. Balch in 1881 as Rackemann & Balch. He was one of the organizers of the Trustees of Reservations in the 1890s. He is buried in the Sedgwick Circle at the Stockbridge Cemetery.

Byron Weston — 1832-1898; born in Dalton; educated at Williston Seminary, Easthampton, Mass.; entered the paper-making business at his uncle's mill in Saugerties, N. Y., then at Lindley Crane in Ballston N. Y. and with May Brothers and Platner & Smith in Lee, Mass., where he became superintendent of their seven mills; one of these made the first wood pulp paper ever manufactured in the United States; died in Dalton. During the Civil War, he raised a company in the 49th Regiment and served as captain; after the war he purchased the Defiance Paper mill in Dalton which specialized in ledger and record paper. He was elected state senator in 1876 and lieutenant governor in 1879, being twice re-elected to one-year terms; donated the athletic field named after him to Williams College; organized the Byron Weston paper company in 1892. His residence in Dalton was known as Weston-holme, and he owned Mount Weston, a 500-acre hill on which he built a Swiss chalet-style home and kept a flock of 500 sheep. In 1885, according to Clark W. Bryan in his Book of Berkshire, Weston hosted the Club at the opening of the chalet. He also owned a 160-acre farm with Holstein and Jersey cattle, and was responsible for much construction in Dalton and for the support of the Congregational Church in Dalton.