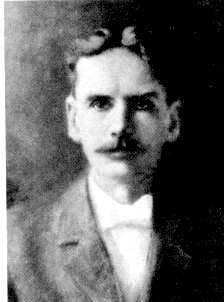 This is the fourth post in a series on the historic membership roster of the Club. These posts may be updated as additional biographical information on the members is uncovered. Research by Martin C. Langeveld, incorporating research by Harold L. Hutchins for a paper given to the Club in 1993. The photo at left is of William Stanley, Jr., who joined in 1892.

Harlan Hoge Ballard — 1853-1934; born in Athens, Ohio; graduated from Williams College in 1874 and became principal of the Lenox, Mass. High School; appointed principal of the Lenox Academy in 1880, where he founded the Agassiz Association, a national organization for the study of natural object that eventually had more than 1,000 chapters worldwide; became librarian at the Berkshire Athenaeum; authored books of poetry, novels and translations from Latin. One of his books, The Tiler's Jewel, a Masonic novel, is still in print. His mother, Julia Perkins Pratt Ballard (1824-1894) was a noted nature writer and author of popular science books for children.

Marcus H. Rogers — born in Mill River (village in New Marlborough) about 1835 (where he published a paper called the Rising Sun as a teenager; publisher and editor of the Berkshire Courier 1865-1879 and later the Berkshire County Eagle 1887-1889; spent more than 60 years in newspaper publishing; retired in Florida; died 1925 at the age of 90.

Rev. William Wallace Fenn — 1862-1932; graduated from Harvard College in 1884 and Harvard Divinity School in 1887; served as pastor in Pittsfield at the Unity Church, later organized as the Unitarian Universalist Church of Pittsfield 1887-1890; then served for 11 years as pastor of the First Unitarian Society of Chicago; became professor of theology at Harvard Divinity School in 1901; served as Dean of the School from 1906 to 1922; author of a number of books of theology; died and was buried in Weston, Vt.

Joseph Edward Peirson — born in Pittsfield 1861; principal and owner of the Preparatory School for Boys

Rollin Hillyer Cooke — 1843-1904; born in Winsted, Conn.; came to Pittsfield to form the banking firm  Burns & Cooke (a brief association with James M. Burns); he then became a Berkshire historian who transcribed more than 50 volumes of primary source material now at the New England Historic Genealogical Society; he published genealogical works on the Bradford and Phelps families and served as editor of Historic Homes and Institutions and Genealogical and Personal Memoirs of Berkshire County, Massachusetts (1906); died in Pittsfield in 1904 as a result of burns from an oil lamp that fell to the floor and exploded.

William Stanley, Jr. — 1858-1916; born in Brooklyn, N. Y.; attended Yale College with the intent to go into law, but abandoned schooling in 1879 and headed for New York; worked in various electrical enterprises and then was hired by George Westinghouse to assist in the development of the transformer; moved to Great Barrington, Mass. in 1885 on account of this health, and there developed the first complete system of high voltage alternating current transmission, including generators, transformers and high-voltage transmission lines; with Westinghouse installed the first commercial multiple-voltage alternating current system in Great Barrington in 1886; founder of the Stanley Electric Manufacturing Company in Pittsfield (1890); the business was sold to the General Electric Company in 1903. Stanley was granted 193 patents during his lifetime.

J. E. C. Sawyer — pastor of the Methodist Episcopal Church; also served at Pittsford, Vt. and Troy, N.Y.; and as editor of the Northern Christian Advocate.

William Vail Wilson Davis —1851-1910; born in Wilson, N.Y.; graduated from Amherst College in 1873; immediately traveled to Constantinople on a teaching assignment at Robert College; returned to Amherst to teach and married Rebecca Frances Stearns, the daughter of Dr. W. A. Stearns, the college president; received theological training at Andover Theological Seminary; became pastor of the Franklin Street Congregational Church in Manchester, N.H. in 1877; moved on to the Euclid Avenue Presbyterian Church in Cleveland, Ohio in 1882; became pastor of the Union Congregational Church in Worcester, Mass. in 1887; became pastor of the First Church of Christ in Pittsfield in 1894 and served for 17 years. He was killed at Bash Bish Falls when he fell into the ravine while trying to hitch up his team of horses during an outing there. During his pastorate in Pittsfield, the church's parish house was expanded to its current configuration, and the Pilgrim Memorial Church was organized as an outgrowth of one of First Church's adult education programs. One of the stained-glass windows at First Church is in memory of Davis. Davis was an early advocate of cleaning up rivers such as Pittsfield's Housatonic, as well as of better treatment of Native Americans and nurturing of Native American culture.

Charles A. Bryam — principal of Pittsfield High School; succeeded Eugene Bouton (who joined the Club in 1899) as superintendent of schools in 1904 when Bouton moved on to Glen Ridge, N.J.

Lawrence C. Swift — 1852-1905; physician and surgeon; born in Geneva, N. Y.; graduated in 1878 from the College of Physicians and Surgeons in New York; moved to Pittsfield in 1887; served as assistant medical examiner for Central Berkshire; died in Pittsfield of meningitis. He was one of the physicians who responded to the March 1904 "double ripper" sled accident in Lenox that inspired Edith Wharton to write her novel Ethan Frome. Swift's grandfather, Gen. Joseph Gardner Swift, was the first graduate of West Point Military Academy and later served as its superintendent.

John F. Noxon — 1856-1936; born in Great Barrington, Mass.; studied law in the office of Justin Dewey in Great Barrington; was admitted to the bar in 1881; Pittsfield city solicitor; partner with John Crawford Crosby in the firm Crosby & Noxon from 1894 to 1905; died in Pittsfield, lived at 262 South St.  (His son, John F. Noxon Jr., also an attorney, was handed a death sentence (later commuted to life imprisonment and ultimately to six years) for electrocuting his infant son, who had Downs Syndrome, in 1914.)d

Eugene Bouton — 1850-1951; born in Jefferson, N.Y.; graduated from Yale College in 1875 and went on to earn a master's degree from Yale in 1881 and a Ph.D. from Syracuse University in 1884; was a teacher in Norwich, Sherbourne an Albany, N. Y., the first principal of the New Paltz (N.Y.) State Normal School, and then superintendent of schools in Bridgeport, Conn., Pittsfield (through 1904) and Glen Ridge, N.J.; died in Bloomfield, N.J. at the age of 100. He was an amateur historian and genealogist, and in 1947 at the age of 96 he was designated the oldest living graduate of Yale.

William Augustus Whittlesey — 1849-1906; born in Danbury, Conn.; graduated from Marietta College, Ohio, in 1879; joined a wholesale woolen business with his brother in Detroit; came to Lebanon, N.Y. in 1872 to run the "literary department" of the Henry A. Tilden Company; married the owner's daughter, Caroline Benton Tilden, in 1874; in 1877 returned to Detroit and then to Florence, Wisconsin, where he was active in the lumber business; came to Pittsfield in 1887 to head the Pittsfield Illuminating Company, which merged in 1889 with the Pittsfield Electric Light Company to become the Pittsfield Electric Company, with Whittlesey as treasurer and general manager; was elected to two terms in the Massachusetts Senate; was a deacon of the First Church for twelve years and president of the YMCA for seven years; helped launch the Stanley Electric Manufacturing Co. (with William Stanley, Jr., who joined the Club in 1892); resigned in 1896; died in Pittsfield. In 1906 he purchased the Pittsfield house earlier occupied by Club member Thaddeus Clapp, but he died the same year. He also maintained a residence in Washington, D.C.

Dr. Frederic A. C. Perrine — born in Freehold, N.J.; graduated from Princeton University in 1883 and earned a Doctor of Science degree there in 1885; the first professor of electrical engineering at Stanford University, serving from 1893 to 1900; came to Pittsfield to serve as president of the Stanley Electric Manufacturing Company, which was sold to General Electric in 1903, whereupon he became a consulting engineer in New Jersey; died of Bright's Disease in Plainfield, N.J. in 1908 at the age of 46.
Posted at 4:45 PM